Extended tour of duty: From the DUA to MOLA

Today is a really bittersweet moment for me, my last day as a salaried archaeologist, after an extended tour of duty lasting forty two years, two months, and sixteen days. Hastened in part by a projected downturn of archaeological work in London, I elected to do the only honourable thing, and throw myself on my well-worn archaeological sword, by accepting voluntary redundancy. I’m not alone in this decision, as fifteen of my colleagues chose to make the same difficult choice.

That even now, I have no idea exactly who has departed ‘stage left’ with me, says much of the speed with which this process was hastily implemented, and it is a real tragedy that these talented people have now gone. Unfortunately, and more worrying, is that the real threat of future enforced ‘compulsory’ redundancies on London archaeologists down the line (though now on hold for obvious reasons) still remains, hanging over their collective heads like the Sword of Damocles.

After this length of time as an archaeologist, it was always going to be a difficult decision to walk away from a job that I have loved with a real passion since I first pushed an overly large, and bendy, trowel (one that my Dad had bought me) into the ground, as a schoolboy on my first excavation in the Old Town of Croydon in 1970. Since that time, I have been blessed with a phenomenal career in archaeology, and have never felt the need to leave London (my home town) to seek work elsewhere, but then why would I?

Apart from having fantastic, complex, deep stratified, urban archaeology to unravel, my happiness and contentment owes so much to the wonderful, funny, tolerant, like-minded people, who it’s been my privilege to have worked with over the years. Anyone, who has been part of that group, will always be in my heart, and be part of my extended archaeological family, and I’d like to thank you all for everything that we have shared together along the way. 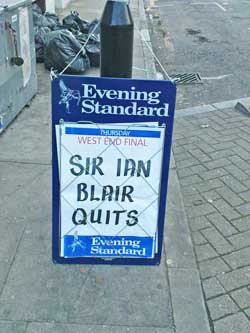 The Evening Standard billboard poster, announcing the resignation of my namesake ‘Sir Ian Blair’ (Commissioner of the Metropolitan Police), couldn’t fail but catch my eye, as I walked home one evening in October, 2008, and my then take a photo of it. Little did I know, that it would come in handy, nigh on twelve years later, to accompany this piece. The similarity between us rests solely in the name, as I have yet to be offered a Knighthood (maybe it will be announced in the Queen's Birthday Honours List in June?), I didn’t receive a £340,000 pay off, or a generous index-linked pension (but then no real surprise there!).

In the grand scheme of things, the above narrative is of little consequence, as we now adjust to our lives changed by the coronavirus pandemic, and the need to embrace social distancing, self-isolation, lockdown, and home schooling. Let’s hope, that as a country, and indeed as a global community, we can emerge from this more united, and can start to lay the foundations for a better future for everyone.

Take good care, keep safe, and I hope to see you on the other side: by this I mean in a pub or bar raising a pint, or cracking open a bottle of wine, and not sat atop Mount Olympus supping Ambrosia.

Caption above:
‘Sir Ian Blair Quits’ Evening Standard headline outside Mortimer Wheeler House. The black bin bags in the background filled with my massive redundancy pay out. I’ve just noticed that someone had also lobbed a couple of 2p coins on the pavement at the foot of the billboard, so clearly there was an office collection as well! 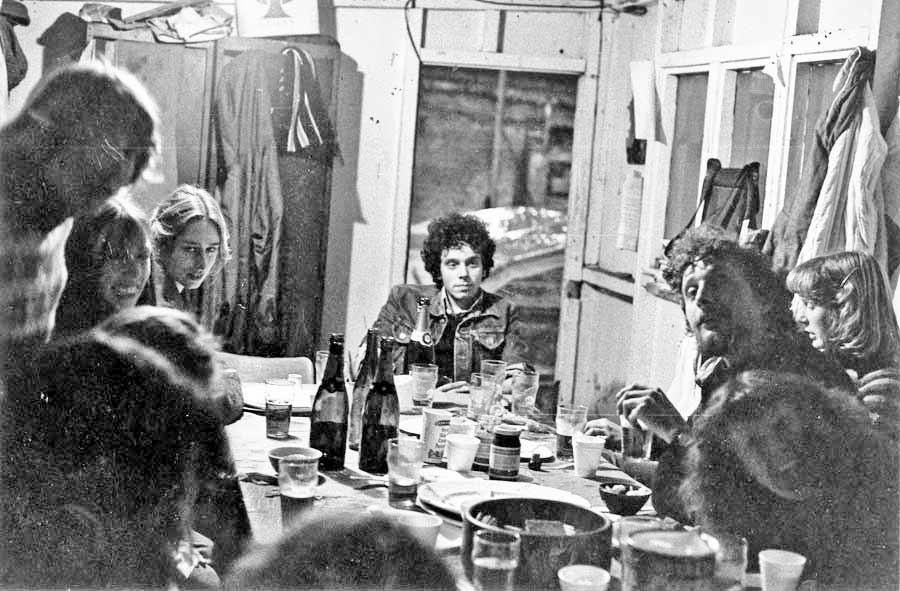 New Boy In Town: A thoughtful (probably slightly inebriated) Ian Blair sat in the GPO site hut in 1978, wondering what his archaeological future may hold, and contemplating if he will be able to stand the pace of another four decades of partying.