From the Elephant Man to Bedlam

Five years before the excavation by Dick Malt and his team at Broad Street Station, Liverpool Street (LSS85) in 1985, the Elephant Man (or at least John Hurt in his guise) had been pursued by a mob through the old Liverpool Street station.

In those years, the City of London, together with the deserted wharfs, warehouses, and streets, between Blackfriars Bridge and London Bridge in Southwark on the South Bank, provided a perfect atmospheric backdrop for films, with a surprisingly large amount having survived the Blitz intact.

The excavation at Broad Street Station, formed part of what was the new Broadgate development, which was to transform the area completely, with Broad Street station (that adjoined the west side of Liverpool Street station) being swept aside.  Archaeological excavations in the south west corner of the site were completed in April 1986. Some 400 burials were excavated from an area within the boundaries of the ‘New Churchyard’, or ‘Bethlem (Bedlam) burial ground’. The cemetery was first established on the former vegetable plot at the Royal Bethlem Hospital, which was walled and opened by the City as a burial ground in 1569 to relieve the congestion occurring in parish burial grounds. The cemetery was used up to 1738, with an estimated 20,000 Londoners buried there in the sixteenth and seventeenth centuries. 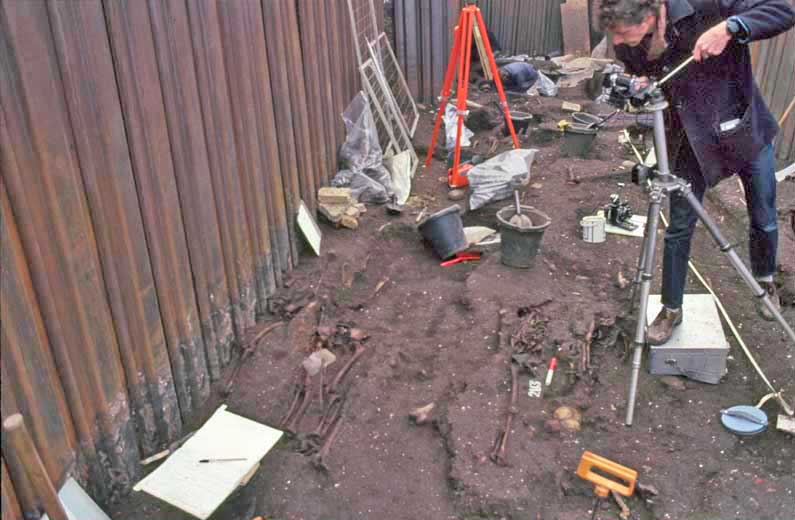 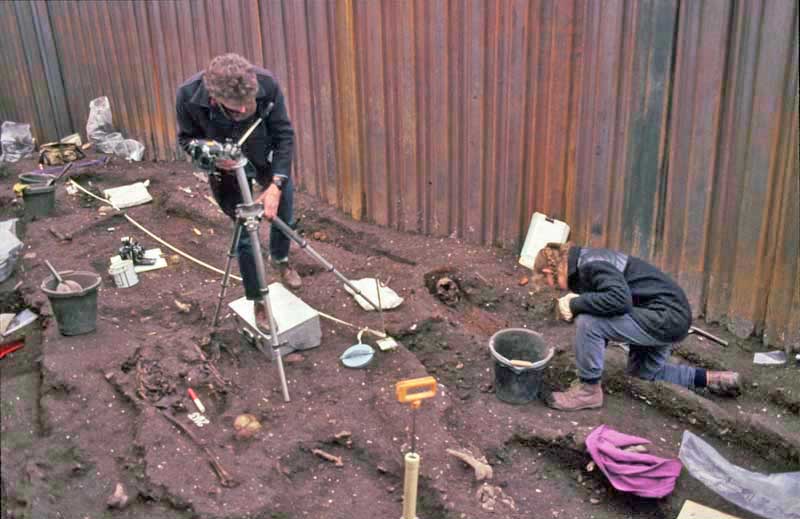 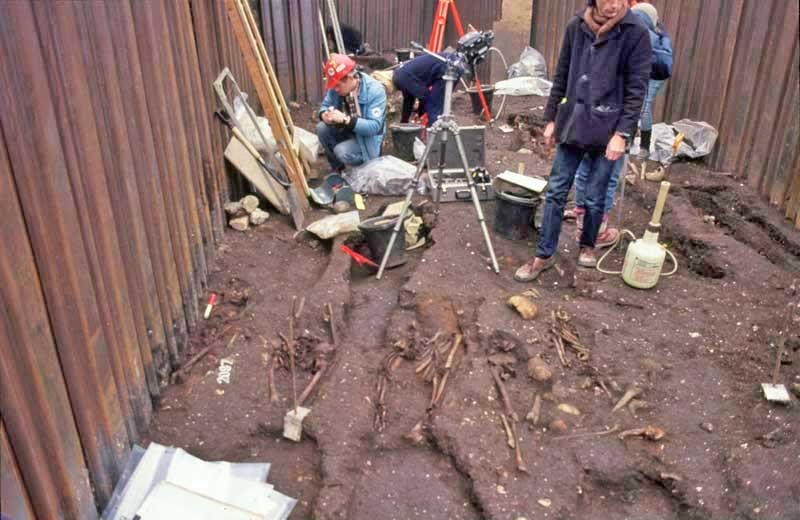 Take 2: move forward thirty years to 2015, and the MOLA excavation on the Bedlam burial ground for Crossrail (XSM10), in preparation for the new Liverpool Street station east entrance. The larger excavation area, immediately adjoined the south side of the earlier (LSS85) trench, and uncovered a further 3,350 burials, bringing the total body count to 3,750. It is just possible, that one of these burials (on the junction of the two trenches) was partially excavated in both excavations, and that its constituent bony parts may yet be able to be reunited. 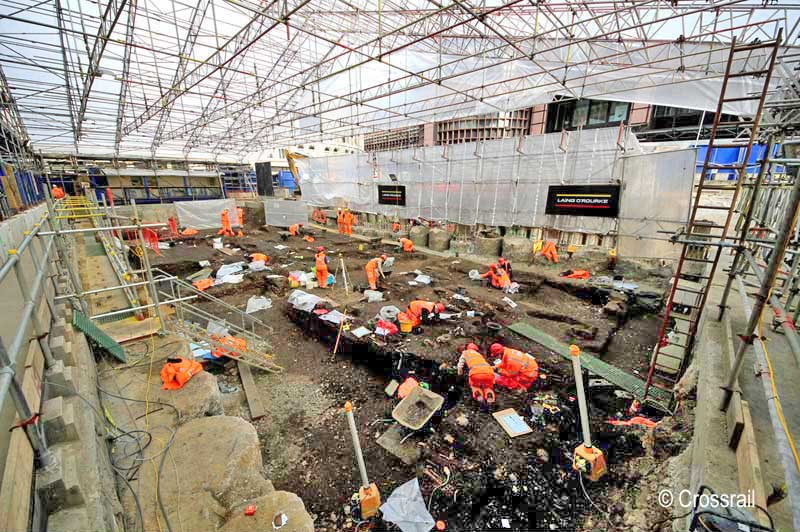 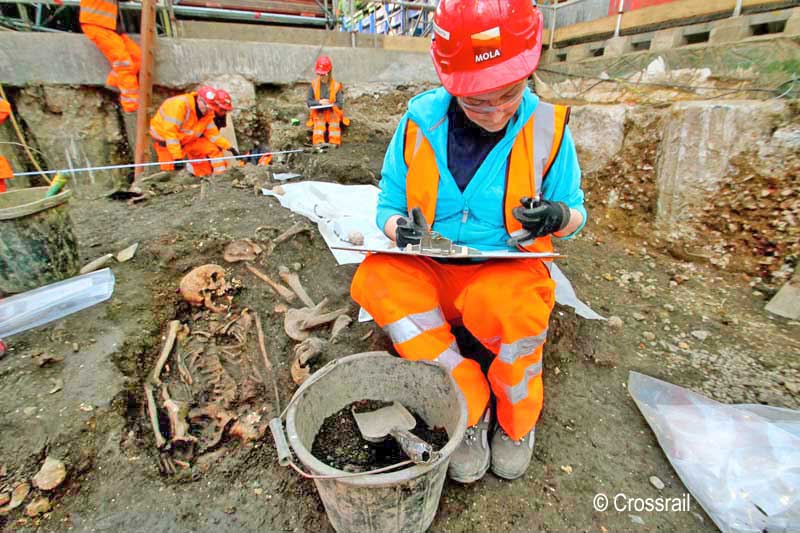 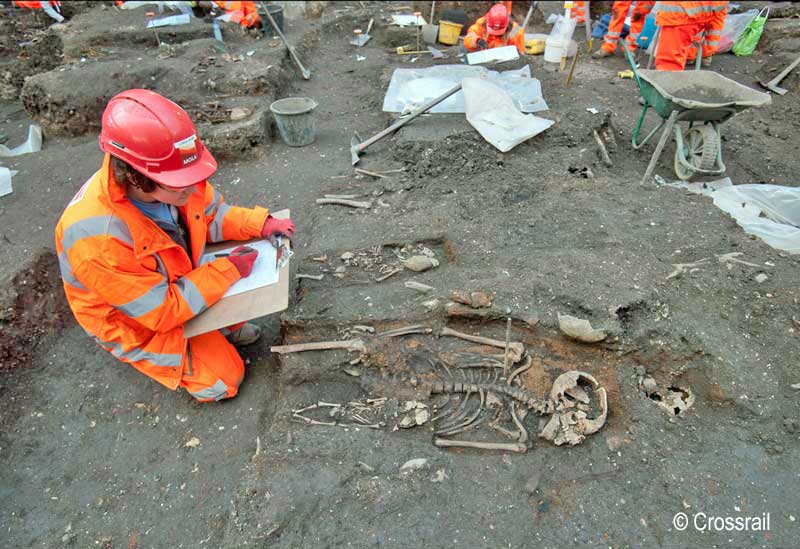 Given that the earlier trench, was located using the more rudimentary survey techniques of the day, that cannot be compared to the accuracy afforded by modern GPS surveying, the exact join between the two areas is likely to remain somewhat hazy: a bit like the Elephant Man emerging through the steam and smoke at Liverpool Street Station on his return from Belgium, a hundred years earlier in June 1886.