'Billingsgate memories: or Mad as a hatter’

Prelude:
Two cows in a field, one says to the other ‘Have you heard about this mad cow disease?’ the other replies: ‘It won’t affect me I’m a horse’ 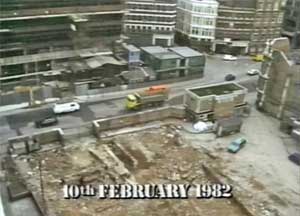 By far the largest of the DUA’s excavations in the 1980’s, was the Billingsgate site (BIG82) undertaken in the former lorry park on the west side of the fish market. If you have never seen the Chronicle ‘On the Waterfront’ film* which first aired on BBC in 1984, and we posted on YouTube some time back, I would urge you to do so, if for no other reason than to see just how much things have changed, not so much in terms of excavation techniques, but as a wonderful illustration of the fashions amongst the archaeologists, working in an altogether much more relaxed era. Even the cars and other vehicles that appear as unpaid extras in the background as they stream along Lower Thames Street, are reminiscent of watching an old Ealing Studios film.

I worked on the Billingsgate site in the early months of the excavation, and have a large number of memories of the place, with these being just a select few:
I know that when the old fish market finally closed down, real concerns were expressed that when they finally turned off the massive freezers beneath the building (which by all accounts had never been defrosted) that the whole building could be in danger of collapse - it didn’t. Before my arrival on site, the initial DUA expeditionary force, consisting amongst others of Dickie Bluer, Prince Chitwood and Steve Roskams, had managed to requisition a fair amount of abandoned fish from said freezers. Given that they hadn’t been defrosted for several thousand years (slight exaggeration!) some of these piscine delicacies were probably long extinct species (I can picture Prince tucking into a Coelacanth on his return from an extended late-night session in his local pub: the George in Dalston).

Although our less than salubrious tea room located in the crab-boiling room did take a while to fully air out, the smell from it was nothing compared to that of a waterlogged brick-lined cesspit that was found on the east side of the site. I kid you not, its fill was fluorescent green (verging on the colour of Swarfega) and stank, so much so that Steve R was the only one brave (foolish!) enough to get into the thing and shovel the offending ‘green-stuff’ out. The smell that wafted across the entire site and Lower Thames Street during this enterprise was the worst I have encountered from any excavated deposit on any archaeological site before or since.

My last recollection relates to a 17th/18th century warehouse building to the south of St Botolph’s church which Chris Fenn (Julie Flude’s brother) and I were excavating. When we came to dismantle its foundations, we found that the mortar between the bricks was running with liquid mercury. Chris, for reasons unknown, spent a fair amount of time chasing droplets of mercury along these walls and into a large finds bag (which isn’t as easy as you might think as mercury is difficult to catch and fully deserves its name quicksilver). By the time we had finished dismantling the walls, he had collected a sizeable bag of the stuff: what ultimately became of it, or indeed Chris, I have no way of knowing.

* Here is the link to watch the Chronicle ‘On the Waterfront’ https://youtu.be/F4TJfGudEus