September 2016, saw the culmination of a series of events across the City of London entitled: ‘London’s Burning’ Great Fire 350, marking the 350th anniversary of the Great Fire of 1666. As any archaeologist working in the City will attest, fires within the city were relatively commonplace, with physical evidence of not only the Great Fire, but two much earlier Roman conflagrations (the Boudican and Hadrianic fires), being found on numerous sites across the City. 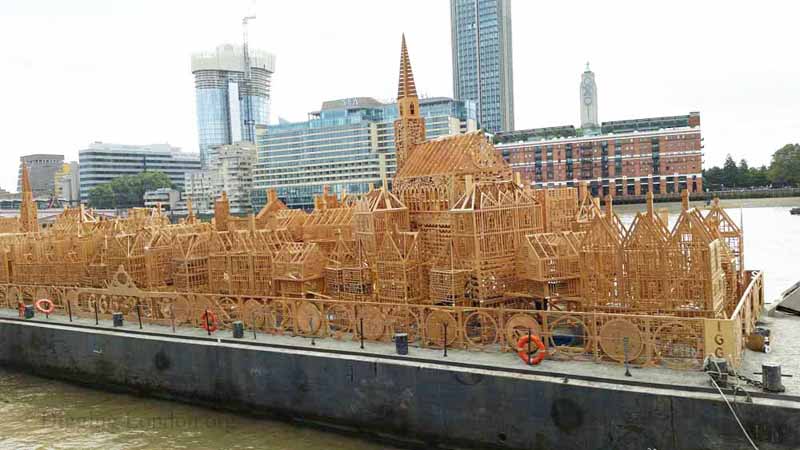 London’s Burning (Great Fire 350): St Pauls Cathedral (yet to be enveloped in flames)

Whilst fires, amongst the closely-packed timber framed and thatched buildings, that lined the narrow streets of London, were clearly a regular occurrence, I was surprised at just how many major fires had been documented after the Roman legions had departed these shores for warmer climes. The earliest of these, broke out in London in 675, destroying the Saxon cathedral, with other fires reported for 798 and 982, and in 989, a fire occurred ‘that, beginning in Aldgate, [it] burned down houses and churches all the way to Ludgate.’ Another major fire occurred in London in 1087, which consumed much of the Norman city, with St Paul's Cathedral again destroyed in the blaze, which was destined to subsequently rise like a phoenix from its ashes on two future occasions.

Point of slight digression now: The subject of the need to perpetually rebuild a structure has just brought to my mind ‘Swamp Castle’ in Monty Python and the Holy Grail:

Before 1666, the term ‘Great Fire of London’ was generally used by Londoners to denote one of two major conflagrations in the early medieval period. The first blaze occurred on Pentecost 1135 (Sunday, May 26), and the second occurred on 10 July 1212. There were other serious fires in London in 1130, 1132, 1220, 1227 and 1299, but none that had the impact of the Great Fire of 1212. Another fire broke out in 1633, destroying 42 premises on the northern third of London Bridge and a further eighty buildings on Thames Street. Some of these buildings were not repaired or replaced, and it is believed that this accidental ‘firebreak’ prevented the bridge from being damaged by the Great Fire of London three decades later.

The culmination of the ‘Great Fire 350’ events, saw a vast 120m-long wooden sculpture of the 17th century skyline, built across two barges, being floated onto the River Thames between Blackfriars Bridge and Waterloo Bridge and burned, in a ‘dramatic retelling of the story of the Great Fire’. On the eve of the scheduled combustion, I took the opportunity to take a stroll through the City, en route to have a look at the miniaturised townscape, before it was reduced to ash. 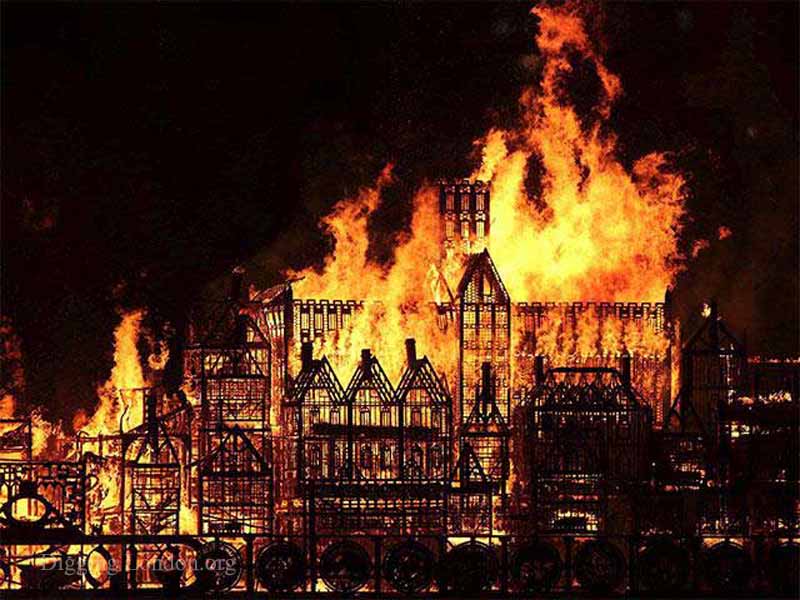 Whilst surveying the scene, and the following day watching ‘the burn’ online, it brought to mind, the bonfire parties, that the DUA held at Trig Lane in the decade from 1974 until the final ‘Trig Wake’ bonfire in 1983.

These annual parties became progressively more elaborate, with two of the final bonfires in 1981 and 1982 seeing the lengthy construction, and ultimate destruction of massive themed tableaus, that featured as their centrepieces: medieval London Bridge, and the Blitz in World War Two. Also randomly incorporated, were a myriad of extraneous topical elements taken from the news of the day, with the Mary Rose and the Falklands War thrown into the mix. The bonfires were choreographed by the archaeologists and were completely uncontrolled, and unchecked by the City authorities, save for an occasional impromptu visit from a curious policeman or members of the fire brigade, but no one was ever detained for questioning, or our huge pyres ever extinguished.

The final bonfire at Trig Lane in 1983 was genuinely the end of an era, as we finally relinquished our riverfront outpost, in advance of the ‘City of London School’ for boys being constructed. To paraphrase an old saying about the 1960s, ‘If you can remember anything about the final ‘Trig Wake’, you weren’t really there.’ And I for one, and Gustav Milne for another, have no memory of the night: so we assume that it must have been a good party, and a fitting send-off for the much loved waterfront home of the DUA.